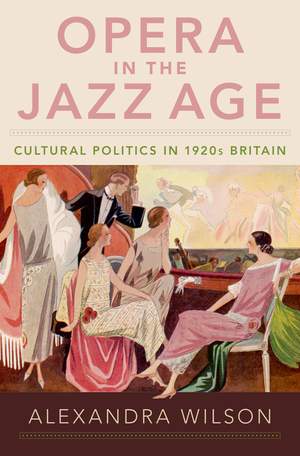 Opera in the Jazz Age: Cultural Politics in 1920s Britain

Jazz, the Charleston, nightclubs, cocktails, cinema, and musical theatre: 1920s British nightlife was vibrant and exhilarating. But where did opera fit into this fashionable new entertainment world? Opera in the Jazz Age: Cultural Politics in 1920s Britain explores the interaction between opera and popular culture at a key historical moment when there was a growing imperative to categorize art forms as "highbrow," "middlebrow," or "lowbrow." Literary studiesof the so-called "battle of the brows" have been numerous, but this is the first book to consider the place of opera in interwar debates about high and low culture. This study by Alexandra Wilson argues that opera was extremely difficult to pigeonhole: although some contemporary commentators believed it tobe too highbrow, others thought it not highbrow enough.

Opera in the Jazz Age paints a lively and engaging picture of 1920s operatic culture, and introduces a charismatic cast of early twentieth-century critics, conductors, and celebrity singers. Opera was performed during this period to socially mixed audiences in a variety of spaces beyond the conventional opera house: music halls, cinemas, cafes and schools. Performance and production standards were not always high - often quite the reverse - but opera-going was evidently great fun.

Office boys whistled operatic tunes they had heard on the gramophone and there was a genuine sense that opera was for everyone. In this provocative and timely study, Wilson considers how the opera debate of the 1920s continues to shape the ways in which we discuss the art form, and draws connections between thebattle of the brows and present-day discussions about elitism. The book makes a major contribution to our understanding of the cultural politics of twentieth-century Britain and is essential reading for anybody interested in the history of opera, the battle of the brows, or simply the perennially fascinating decade that was the 1920s.