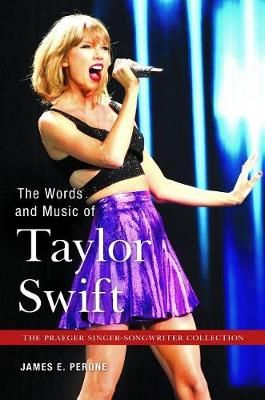 The Words and Music of Taylor Swift

This scholarly analysis of the music of Taylor Swift identifies how and why she is one of the early 21st century's most recognizable and most popular stars.

By the age of 13, singer-songwriter Taylor Swift had already inked a development deal with a major record label. This early milestone was an appropriate predictor of what accomplishments were to come. Now a superstar artist with an international fanbase of millions and several critically acclaimed and commercially successful albums, Swift has established herself as one of the most important musicians of the 21st century. This accessible book serves Taylor Swift fans as well as students of contemporary popular music and popular culture, critically examining all of this young artist's work to date.

The book's organization is primarily chronological, covering Taylor Swift's album and single releases in order of release date while also documenting the elements of her music and personality that have made her popular with fans of country music and pop music across a surprisingly diverse age range of listeners. The chapters address how Swift's songs have been viewed by some fans as anthems of empowerment or messages of encouragement, particularly by members of the LGBTQ community, those who have been bullied or been seen as outsiders, and emerging artists. The final chapter places Swift's work and her public persona in the context of her times with respect to her use of and relationship with technology-for example, her use of social media and songwriting technology-and her expressions of a new type of feminism that is unlike the feminism of the 1970s.