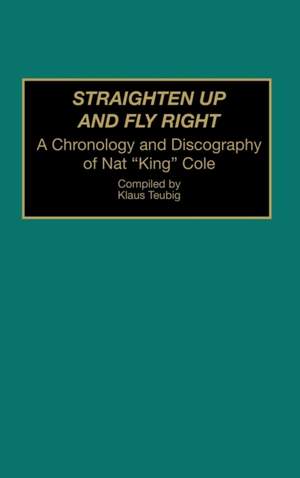 Straighten Up and Fly Right: A Chronology and Discography of Nat King Cole

Thirty years of collecting and 15 years of research have resulted in this discography that features all known recordings, transcriptions, and films made by Cole until 1950, when his jazz style faded away, and a selection of his later jazz-related trio sides. It includes for the first time Cole's unknown 16 transcriptions of his Wild Root broadcasts. This volume documents the development of a gifted pianist into a ballad-singing star and leader of the most famous jazz trio of the 1940s. All routes and recording activities by Cole and his fellow musicians from 1936 to the 1950s are chronicled here.

Nat King Cole is widely known as a singer of unforgettable fame, but that he was a true King of Jazz Piano in its heyday and the inventor of today's piano trios is almost forgotten. This discography gives all details of the King Cole Trio's activities, listing recording sessions, available broadcasts on discs, film soundtracks, and guest appearances by the trio or by Cole alone, on such shows as Jubilee, Command Performance, Supper Club, Mail Call, and Kraft Music Hall. A special listing is included of those occasions when Cole participated as unknown or unnamed pianist on radio transcriptions for singers like Anita Boyer, Anita O'Day, The Dreamers, The Barrie Sisters, Bonnie Lake, Rose Murphy, Maxine Johnson, and Juanelda Carter. In addition, the book includes the Cole Trio's engagement routes with exact dates if known, names of promoters, and much more. The biographical portion is a fascinating period piece of Jazz-age memorabilia.