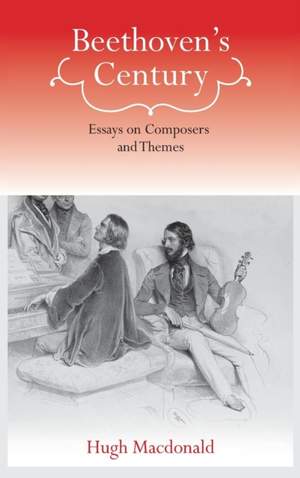 Macdonald's curiosity is boundless. . . and he satisfies it with unfailing scholarship and wit. . . . He gives the most thorough account yet of Hugo Wolf's complicated critical attitude to Wagner... — Opera More…

In Beethoven's Century: Essays on Composers and Themes, world-renowned musicologist Hugh Macdonald draws together many of his richest essays on music from Beethoven's time into the early twentieth century. The essays are here revised and updated, and some are printed in English for the first time. Beethoven's Century addresses perennial questions of what music meant to the composer and his audiences, how it was intended to be played, andhow today's audiences can usefully approach it. Opening with a revealing analysis of Beethoven's not always generous regard for his listeners, the essays probe aspects of Schubert's musical personality, the brief friendshipbetween Berlioz and Schumann, Liszt's abilities as a conductor, and Viennese views of Wagner as expressed by Hugo Wolf. Essays on comic opera and trends in French opera libretti in the late nineteenth century reflect the author's long-standing sympathy for French music, and strikingly eccentric personalities in the world of music, such as Paganini, Alkan, Skryabin, and Janácek, are brought to life. Beethoven's Century concludes with a wrylook at some startling developments in early twentieth-century music that have often been overlooked.  Hugh Macdonald has taught music at the Universities of Cambridge, Oxford, and Glasgow, and since 1987 has been Avis H. Blewett Distinguished Professor of Music at Washington University, St. Louis. He has written books on Skryabin and Berlioz, and is a regular pre-concert speaker for the Boston and St. Louis Symphony Orchestras.

Macdonald's curiosity is boundless. . . and he satisfies it with unfailing scholarship and wit. . . . He gives the most thorough account yet of Hugo Wolf's complicated critical attitude to Wagner in a musically complicated Vienna. . . Depth of thought and high critical intelligence. . . mark all these essays, and make them an invigorating read. Raise your glass to Hugh Macdonald! -- John Warrack