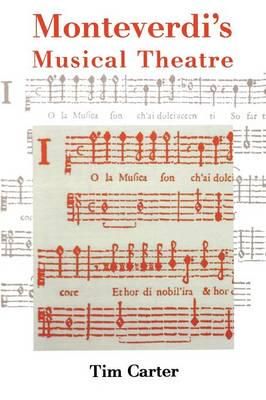 Claudio Monteverdi (1567-1643) is well known as the composer of the earliest operas still performed today. His 'Orfeo', 'Il ritorno d'Ulisse in patria' and 'L'incoronazione di Poppea' are internationally popular nearly four centuries after their creation. These seminal works represent only a part of Monteverdi's music for the stage, however. He also wrote numerous works that, while not operas, are no less theatrical in their fusion of music, drama and dance. This impressive book is the first to survey Monteverdi's entire output of music for the theatre - his surviving operas, other dramatic musical compositions and lost works. Tim Carter, a leading Monteverdi expert, begins by charting the progress of early opera from the north Italian courts to the 'public' theatres of Venice. He places Monteverdi's stage works in the broader context of early seventeenth-century theatrical endeavour and explores crucial questions of genre, interpretation and performance practices, both then and now. Taking a pragmatic view of how the works were brought to life on the stage and how they were seen in their own time, Carter discusses the complex modes of production that involved a range of artists, artisans and performers. With insightful commentary on the composer's individual works and on the cultural and theatrical contexts in which they were performed, Carter casts new light on Monteverdi's remarkable achievement as a man of the theatre. Tim Carter is David G. Frey Distinguished Professor of Music at the University of North Carolina at Chapel Hill. He was previously Professor of Music at Royal Holloway, University of London.