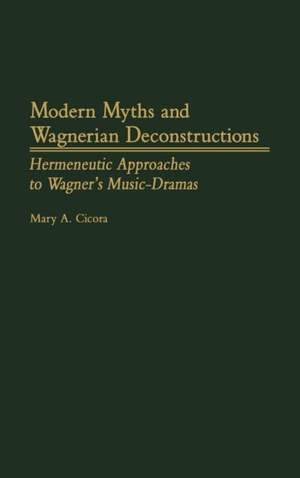 Consisting of six studies that present hermeneutical analyses of Wagnerian dramas, this book discusses Wagner's mature single dramas from Hollander to Parsifal with reference to the concept of Romantic irony and the basic theoretical orientation of post-structuralism. Wagner is best known as a composer of mythological works, but these music-dramas contain basic problems that essentially contradict what is regarded as their mythological or legendary nature. They all self-referentially play out certain critical processes. Focusing on the very issue of interpretation, this work asks how Wagner's dramas use their legendary or mythological raw material in a specifically 19th-century Romantic way to create meaning. It is argued that by means of Romantic irony, internal self-reflection or self-consciousness, each work deconstructs its own mythological or legendary nature.

Musicologists with an interest in Wagner's works, and literary scholars who are interested in interdisciplinary applications of literary-critical theory, will appreciate this unique application of literary, theoretical, and critical concepts to the understanding of his music-dramas. This work will also appeal to scholars of German literature and of German cultural history. It discusses Wagner's single dramas from Holl^Dander to Parsifal.