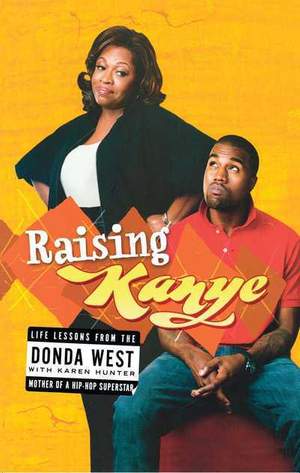 Raising Kanye: Life Lessons from the Mother of a Hip-Hop Superstar

The mother of rap superstar Kanye West shares her experiences on being a single mother raising a celebrity.

As the mother of hip-hop superstar Kanye West, Donda West has watched her son grow from a brilliant baby boy with all the intimations of fame and fortune to one of the hottest rappers on the music scene. And she has every right to be proud: she raised her son with strong moral values, teaching him right from wrong and helping him become the man he is today. In Raising Kanye, Donda not only pays homage to her famous son but reflects on all the things she learned about being his mother along the way.

Featuring never-before-seen photos and compelling personal anecdotes, Donda's powerful and inspiring memoir reveals everything from the difficulties she faced as a single mother in the African American community to her later experiences as Kanye's manager as he rose to superstardom. Speaking frankly about her son's reputation as a "Mama's Boy," and his memorable public outbursts about gay rights and President George W. Bush, Donda supports her son without exception, and here she shares the invaluable wisdom she has taken away from each experience-passion, tolerance, patience, and above all, always telling the truth. Ultimately, she not only expresses what her famously talented son has meant to her but what he has meant to music and an entire generation.