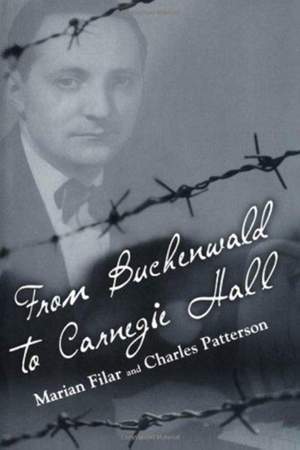 From Buchenwald to Carnegie Hall

Before the Nazis sent members of the Filar family to Treblinka, these were the last words Marian Filar's mother said to him: ""I bless you. You'll survive this horror. You'll become a great pianist, and I'll be very proud of you."" Born in 1917 into a musical Jewish family in Warsaw, Filar began playing the piano when he was four. He performed his first public concert at the age of six. At twelve he played with the Warsaw Philharmonic Orchestra and went on to study with the great Polish pianist and teacher Zbigniew Drzewiecki at the State Conservatory of Music. After the German invasion, Filar fled to Lemberg (Lvov), where he continued his music studies until 1941, when he returned to his family in the Warsaw Ghetto. The Nazis killed his parents, a sister, and a brother, but he and his brother Joel survived as workers on the German railroad. After taking part in the Warsaw Ghetto uprising, Marian and Joel were captured and sent to Majdanek, Buchenwald, and other concentration camps. After liberation Filar was able to resume his career by studying with the renowned German pianist Walter Gieseking. In 1950 he immigrated to the United States and soon after was performing concerts with Eugene Ormandy and the Philadelphia Orchestra. He made his Carnegie Hall debut on New Year's Day, 1952. He became head of the piano department at the Settlement Music School in Philadelphia and later a professor of music at Temple University, while continuing to perform in Europe, South America, Israel, and the United States. Filar does not end his story with liberation but with the fulfillment of his mother's blessing. Without rancor or bitterness, his memoir comes full circle, ending where it began--in Warsaw. In 1992 Filar traveled to Poland to visit the school next to what had once been the Umschlagplatz, the place from which Jews had been sent to Treblinka and where he said farewell to the mother who blessed him. Marian Filar, an internationally acclaimed concert pianist and retired professor at Temple University, has performed throughout the world and with the Philadelphia Orchestra, the Chicago Symphony Orchestra, the National Symphony Orchestra, and many others. He lives in Pennsylvania. Charles Patterson is the author of Anti-Semitism: The Road to the Holocaust and Beyond, Marian Anderson, and The Eternal Treblinka: Our Treatment of Animals and the Holocaust.