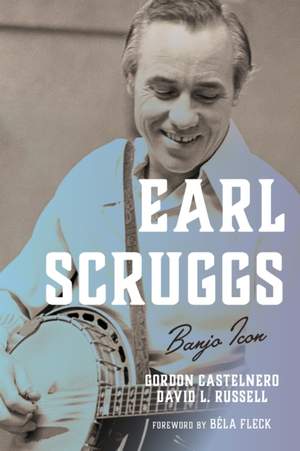 When I began reading my new copy of Earl Scruggs, Banjo Icon, I was so engrossed I couldn't put it down. This biography of our beloved banjo guru will take you back as if you're there every step... — Banjo Newsletter More…

As Earl Scruggs picked his banjo with machine gun precision at his 1945 debut at the Ryman Auditorium, he set in motion a successful career and enduring legacy that would eclipse anything the humble farm boy from North Carolina could have imagined. Scruggs's revolutionary three-finger roll patterns electrified audiences and transformed the banjo into a mainstream solo instrument pursued by innumerable musicians. In Earl Scruggs: Banjo Icon, Gordon Castelnero and David L. Russell chronicle the life and legacy of the man who single-handedly reinvigorated the five-string banjo and left an indelible mark on bluegrass and folk music. After his tenure with the father of bluegrass music, Bill Monroe, Scruggs formed (with Lester Flatt) the Foggy Mountain Boys, also known as Flatt and Scruggs; the Earl Scruggs Revue with his sons; and finally his Family & Friends band. Scruggs released more than forty albums and reached millions of fans through performances on The Beverly Hillbillies and his music's inclusion in the 1967 movie Bonnie and Clyde.

Over his long career, Scruggs received numerous accolades and collaborated with stars such as Billy Joel, Elton John, Sting, Johnny Cash, Bob Dylan, Joan Baez, Vince Gill, Travis Tritt, the Byrds, and Steve Martin. Through interwoven interviews with the Scruggs family and more than sixty notable musicians and entertainers, Castelnero and Russell reveal that, despite the fame Scruggs achieved, he never lost his humility and integrity. This biography testifies to Scruggs's enduring influence and sheds light on the history of bluegrass for musicians, students, and anyone entranced by Scruggs's unmistakable sound.

When I began reading my new copy of Earl Scruggs, Banjo Icon, I was so engrossed I couldn't put it down. This biography of our beloved banjo guru will take you back as if you're there every step of the way, growing up as part of Earl's family, sharing in the music, the simple farm life that was his home in his early years, and the various steps that took him to the forefront of the bluegrass world.... [A]fter reading this book, you'll feel like you knew [Scruggs] his entire life

This is an insightful tribute to the man who put the banjo in bluegrass. Taken from many oral histories or first-hand accounts of folks who knew Scruggs, we get a rather detailed look into his life from the time he was a child right up to the time of his death. With a foreword by Bela Fleck setting the stage, we hear from a who's who of modern banjo players of all ages. The authors have even extrapolated the influence that Scruggs had upon succeeding generations by including interviews with so many young players who felt his influence first-hand and through his many recordings and appearances.... This book is essential for all fans of bluegrass banjo, Flatt & Scruggs, and the Earl Scruggs Revue or even The Beverly Hillbillies.... [It presents] a solid representation of the man behind the music

Earl Scruggs: Banjo Icon by Gordon Castelnero and David L. Russell uses an oral history approach to produce a volume both scholarly and readable. With the full cooperation of the Scruggs family, they conducted 72 interviews with family members, musicians, recording industry people, and Earl Scruggs' many friends and admirers to create a well-rounded account filled with lots of previously unpublished information while never losing the human touch, always keeping the subject matter interesting and real