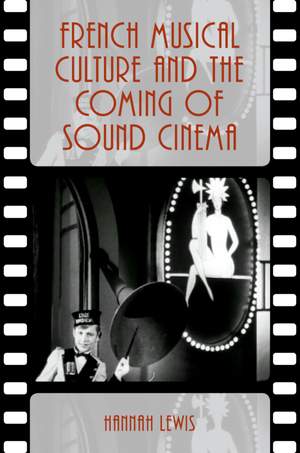 French Musical Culture and the Coming of Sound Cinema

The transition from silent to synchronized sound film was one of the most dramatic transformations in cinema's history, as it radically changed the technology, practices, and aesthetics of filmmaking within a few short years. In France, debates about sound cinema were fierce and widespread. In French Musical Culture and the Coming of Sound Cinema, author Hannah Lewis argues that the debates about sound film resonated deeply within French musical culture of the early 1930s, and conversely, that discourses surrounding a range of French musical styles and genres shaped audiovisual cinematic experiments during the transition to sound. Lewis' book focuses on many of the most prominent directors and screenwriters of the period, from Luis Bunuel to Jean Vigo, as well as experiments found in lesser-known films. Additionally, Lewis examines how early sound film portrayed the diverse soundscape of early 1930s France, as filmmakers drew from the music hall, popular chanson, modernist composition, opera and operetta, and explored the importance of musical machines to depict and to shape French audiovisual culture. In this light, the author discusses the contributions of well-known composers for film alongside more popular music hall styles, all of which had a voice within the heterogeneous soundtrack of French sound cinema. By delving into this fascinating developmental period of French cinematic history, Lewis encourages readers to challenge commonly-held assumptions about how genres, media, and artistic forms relate to one another, and how these relationships are renegotiated during moments of technological change.