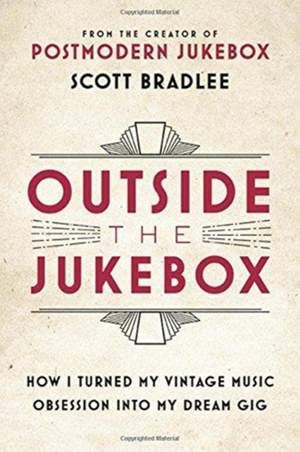 Outside the Jukebox: How I Turned My Vintage Music Obsession into My Dream Gig

Outside the Jukebox will be of interest to up-and-coming musicians and Internet performers, not least because of his description of the traits and habits that helped Bradlee flourish....Here's... — The Weekly Standard More…

From the creator of the sensation Postmodern Jukebox--with millions of fans globally--comes an inspirational memoir about discovering what you love and turning it into a creative movement.

With student loan debt piling up and no lucrative gigs around the corner, Scott Bradlee found himself in a situation all too familiar to struggling musicians and creative professionals, unsure whether he should use the little income he had to pay the rent on his basement apartment on the fringes of New York City or to avoid defaulting on his loans.

It was in these desperate circumstances that Bradlee began experimenting, applying his passion for jazz, ragtime, and doo wop styles to contemporary hits by singers like Macklemore and Miley Cyrus--and suddenly an idea was born. The bands Bradlee went on to launch--from A Motown Tribute to Nickelback to Postmodern Jukebox, the rotating supergroup devoted to period covers of pop songs for which he is best known--borrowed from and refined the initial idea he had arrived at to bring genres now sometimes considered arcane to wide audiences. Today, the success he has had is astonishing, with Postmodern Jukebox collecting upwards of three million subscribers on YouTube, selling out major venues around the world, and developing previously unknown talent into superstar singers.

Taking readers through the false starts, absurd failures, and unexpected breakthroughs of Bradlee's journey from a lost musician to a musical kingmaker headlining Radio City Music Hall--and presenting all the insights he learned along the way to becoming an entrepreneur like no other--OUTSIDE THE JUKEBOX is an inspiring memoir about how one musician found his rhythm and launched a movement that would forever change how people make, distribute, and enjoy their favorite songs.

Outside the Jukebox will be of interest to up-and-coming musicians and Internet performers, not least because of his description of the traits and habits that helped Bradlee flourish....Here's hoping that Bradlee's hunger for success and his love of music keep him producing joyous, winning work for many years to come