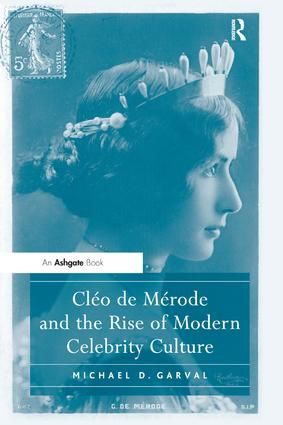 Cleo de Merode and the Rise of Modern Celebrity Culture

A good read, a critical frolic through virtually forgotten chapters of the history of performance and celebrity, this wonderfully illustrated book models techniques for the critical sustained... — Choice More…

The first English-language monograph on the French dancer and model, Cleo de Merode and the Rise of Modern Celebrity Culture explores the haunting legacy of this intriguing and glamorous figure, an international celebrity at the dawn of modern celebrity culture. Situating Merode at a pivotal moment in the history of fame and visual culture, this study analyzes how technological and societal changes led to our star-struck modernity. Merode was one of the earliest examples of fame born from mass visual culture, as newly available postcards circulated her image around the globe. Through Merode, Michael D. Garval illuminates broader trends of the Belle A0/00poque: persistent statue fetishism within a vibrant monumental culture, rampant exoticism amid unprecedented colonial expansion, the rapid growth of the illustrated press, the rise of female show business personalities, the advent of cinema and x-rays, and a burgeoning sense of new visual possibilities. The volume examines how Merode heralded modern celebrity icons; problematizes the status of women and women's bodies under intense public scrutiny; and exposes the paradoxes of a society captivated by a mass media-driven dream of intimacy from afar.Cleo de Merode and the Rise of Modern Celebrity Culture probes the neglected prehistory of a visual culture obsessed with celebrities and their images.

A good read, a critical frolic through virtually forgotten chapters of the history of performance and celebrity, this wonderfully illustrated book models techniques for the critical sustained investigation of ephemeral popular imagery. It is a serious study that illuminates celebrity culture, from Hollywood to Andy Warhol to the online personae of today's virtual celebrities. A resource for those interested in visual culture, French culture, performance history (especially dance), and the history and psychology of celebrity... Highly recommended. All readers