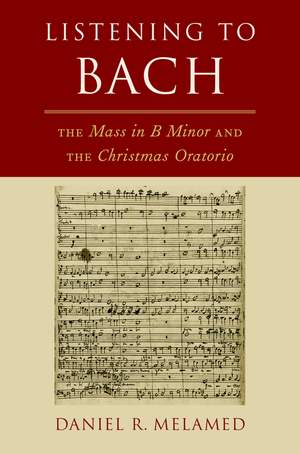 Listening to Bach: The Mass in B Minor and the Christmas Oratorio

Melamed is sensible and tolerant in detailing the wide diversity of present-day Bach performance practice. The message is that there is no one way of listening to Bach, but awareness of musical... — Choice More…

Of all the things we can know about J. S. Bach's Mass in B Minor and Christmas Oratorio, the most profound come from things we can hear. Listening to Bach explores musical style as it was understood in the early eighteenth century. It encourages ways of listening that that take eighteenth-century musical sensibilities into account and that recognize our place as inheritors of a long tradition of performance and interpretation. Daniel R. Melamed shows how to recognize old and new styles in sacred music of Bach's time, and how movements in these styles are constructed. This opens the possibility of listening to the Mass in B Minor as Bach's demonstration of the possibilities of contrasting, combining, and reconciling old and new styles. It also shows how to listen for elements that would have been heard as most significant in the early eighteenth century, including markers of sleep arias, love duets, secular choral arias, and other movement types. This offers a musical starting point for listening for the ways Bach put these types to use in the Mass in B Minor and the Christmas Oratorio. The book also offers ways to listen to and think about works created by parody, the re-use of music for new words and a new purpose, like almost all of the Mass in B Minor and Christmas Oratorio. And it shows that modern performances of these works are stamped with audible consequences of our place in the twenty-first century. The ideological choices we make in performing the Mass and Oratorio, part of the legacy of their performance and interpretation, affect the way the work is understood and heard today. All these topics are illustrated with copious audio examples on a companion Web site, offering new ways of listening to some of Bach's greatest music.

Melamed is sensible and tolerant in detailing the wide diversity of present-day Bach performance practice. The message is that there is no one way of listening to Bach, but awareness of musical style can help one learn both new and old ways of listening. This important book is must reading