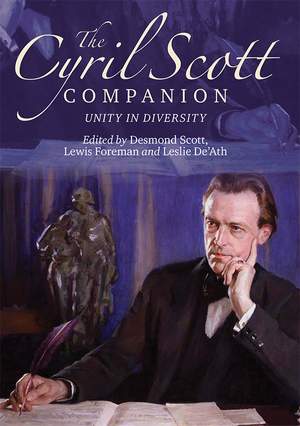 Cyril Scott (1879-1970) was an English composer, writer and poet. He was a prolific composer-pianist writing over 400 works including four symphonies, three operas and concerti for piano, violin, cello, oboe and harpsichord. Oftenperforming his own compositions he became a pioneer of British piano music, and his music was admired by composers as diverse as Debussy, Strauss, Stravinsky and Percy Grainger, the last a lifelong friend. A true polymath, Scottwas also the author of forty-one books, including two autobiographies and one unpublished memoir, on subjects ranging from music, alternative medicine and humour to occultism, theosophy and Christianity. In addition, he wrote poems and plays and painted watercolours.  This Companion explores the life and work of this remarkably creative man. It provides a comprehensive analysis and appraisal of all the available music and includes a complete catalogue of his musical works, along with a discography. Several works completely unknown to the musical world, both music and literary (such as the memoir 'Near the End of Life'), are here newly catalogued and discussed. Altogether, thevolume gives a broad picture of Scott's entire output in literary, dramatic and philosophical genres.  LEWIS FOREMAN has published many books and articles on music. His Boydell titles include Bax: A Composer and hisTimes (2007), The John Ireland Companion (2011) and with Susan Foreman Felix Aprahamian (2015).  DESMOND SCOTT is the son of Cyril Scott. He was an actor, theatre director and TV writer. He is also a sculptor and past-President of the Sculptors Society of Canada. He has contributed to The New Percy Grainger Companion (Boydell Press, 2010) and has published articles in musical journals on Cyril Scott.   LESLIE DE'ATH isProfessor, Faculty of Music, Wilfrid Laurier University, Waterloo, Canada. He is Associate Editor of the Journal of Singing, a pianist, conductor and opera director. He has recorded Scott's complete solo piano music for Dutton.   Contributors: PETER ATKINSON, MARTYN BRABBINS, LESLIE DE'ATH, PETER DICKINSON, LEWIS FOREMAN, KATHERINE HUDSON, VALERIE LANGFIELD , KURT LELAND, STEPHEN LLOYD, STEVEN MARTIN, ROHINTEN DADDY MAZDA, RICHARD PRICE, EDMUND RUBBRA, DESMOND SCOTT, MARTIN YATES