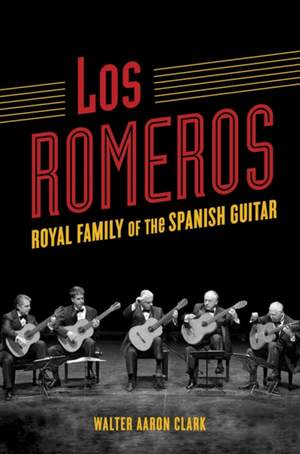 Spanish emigre guitarist Celedonio Romero gave his American debut performance on a June evening in 1958. In the sixty years since, the Romero Family-Celedonio, his wife Angelita, sons Celin, Pepe, and Angel, as well as grandsons Celino and Lito-have become preeminent in the world of Spanish flamenco and classical guitar in the United States. Walter Aaron Clark's in-depth research and unprecedented access to his subjects have produced the consummate biography of the Romero family. Clark examines the full story of their genius for making music, from their outsider's struggle to gain respect for the Spanish guitar to the ins and outs of making a living as musicians. As he shows, their concerts and recordings, behind-the-scenes musical careers, and teaching have reshaped their instrument's very history. At the same time, the Romeros have organized festivals and encouraged leading composers to write works for guitar as part of a tireless, lifelong effort to promote the guitar and expand its repertoire. Entertaining and intimate, Los Romeros opens up the personal world and unfettered artistry of one family and its tremendous influence on American musical culture.