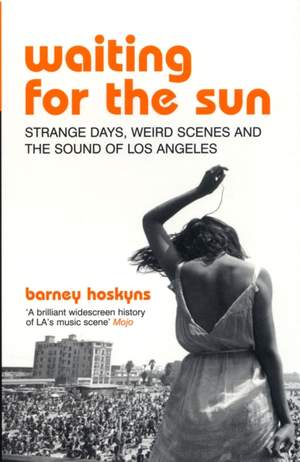 Waiting for the Sun: Strange Days, Weird Scenes and the Sound of Los Angeles

No city in the western world exerts such a fascination as the glamorous, debauched Los Angeles, and there is no city with more of a draw to musicians. Defined by the music of Brian Wilson, The Doors, NWA, jazz, funk, soul, hip hop, and fulled by drugs, alcohol, sun, sex and surf, LA has seen it all. Barney Hoskyns tells the definitive story of L.A.'s post-war music scene and spent nearly a decade researching this account of music which developed into a culture of its own. "A hilarious, chilling, thoroughly scabrous history of post-war pop music in Los Angeles fascinating." - "Los Angeles Times Book Review". "Beautifully written" - "Melody Maker". "Fabulously authoritative and grimly compelling." - "Sunday Times". "Magnificent. His enthusiasm for the subject is not only tangible but infectious, and will have you rifling through forgotten areas of your record collection with renewed passion." - "VOX". "A terrific, sprawling, hugely ambitious study of the city's rock 'n' roll history, Hoskyns skilfully straddles his role as detached historian and gushing enthusiast in this tremendous book." - "NME". "Impressive a chronicle of how the city of dreams has so often turned itself into a city of nightmares. Hoskyns writes with awesome command." - "Time Out".