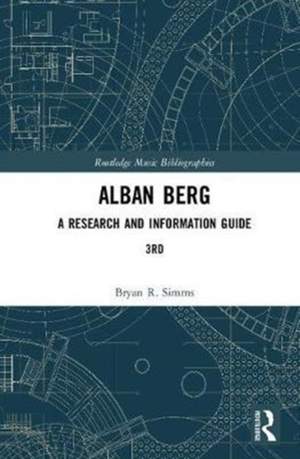 Alban Berg: A Research and Information Guide, Third Edition is an annotated bibliography highlighting both the nature of primary sources related to the composer and the scope and significance of the secondary sources that deal with Berg, his compositions, and his influence as a composer. It is a reliable, complete, and useful resource and a starting point for anyone-performer, teacher, student, or scholar-wanting to learn about Berg's life, works, and cultural milieu. The third edition has 162 additional citations since the publication of the second edition, many arising after the expiration of copyright of Berg's musical and archival works 2005.

Many important new, primary sources of information have appeared, most notably the letter exchanges with his wife, recently published in a three-volume critical edition (in German), as well as letter exchanges with Alma Mahler and Erich Kleiber, and later correspondences with Anton Webern. There has also been a notable increase in the availability of commercial video recordings of Berg's operas, Wozzeck and Lulu.