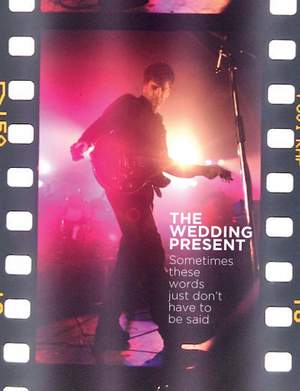 The Wedding Present: Sometimes these words just don't have to be said

This is the first ever official biography of indie legends The Wedding Present . With an introduction and commentary from band founder and Wedding Present mainstay David Gedge,  The Wedding Present : Sometimes These Words Just Don’t Have To Be Said  is a collection of over 400 fan memories interspersed with contributions and insights from fellow founder members Peter Solowka and Shaun Charman. The book contains stories from a host of collaborators from throughout the band’s career, including former band members and producers, the latter including Chris Allison, Steve Albini and Grammy Award winning Andrew Scheps. From David Gedge’s school days through to concerts in 2016, the book is packed with full colour images including many from David Gedge’s personal archive. It contains stories from a host of celebrity fans including Gaz Coombes [Supergrass], Mark Burgess [The Chameleons], Martin Noble [British Sea Power], Emma Pollock [The Delgados], John Robb [The Membranes], William Potter [CUD], Rolo McGinty [The Woodentops] and many bands who have performed at David’s annual ‘At The Edge Of The Sea’ festival. Other celebrities who have contributed to the book include Hot Fuzz actor Nick Frost, Game Of Thrones actor Ben Crompton, broadcasters Marc Riley, Shaun Keaveny, Andy Kershaw, Andrew Collins and Robin Ince, journalists Mark Beaumont and Ian Gittins and celebrated writers Ian Rankin, Mike Gayle and Peter Bowker. The Wedding Present was born in Leeds in 1985. Debut single ‘Go Out And Get ‘Em, Boy!’ and first album  George Best , with its iconic cover image featuring the legendary Manchester United footballer, set out the band’s stall. Thirty years and twelve albums later, The Wedding Present can boast a legion of die hard followers around the world, brought up on a diet of squalling guitars and bittersweet lyrics about failed romances. Once described as a Smiths fan’s second favourite band, The Wedding Present and David’s alter ego, Cinerama, have between them clocked up more than 1,000 live performances around the world, from Manchester to Melbourne. This book gives an insight into what it’s like to attract - or become one of - a coterie of passionate fans who have followed the group since the beginning. Many have fallen in love with – and to – the band’s music. As one fan describes it, ‘They have been the sound-track to my life.’ DJ John Peel once said of The Wedding Present’s founding member and main songwriter ‘The boy Gedge has written some of the best love songs of the Rock ’n’ Roll era. You may dispute this but I’m right and you’re wrong!’ About the authors: Richard Houghton Based in the North West of England, Richard’s 2016 book "The Beatles – I Was There" went Top 20 in the Amazon Music charts. Richard has also written books on The Rolling Stones and The Who. He is also a supporter (in this order) of Northampton Town and Manchester City. David Gedge The Wedding Present originally formed in 1985 in Leeds, England and throughout their career have been led by vocalist and guitarist David Gedge, the band's only constant member. The band released their ninth album, "Going, Going..." in September 2016.