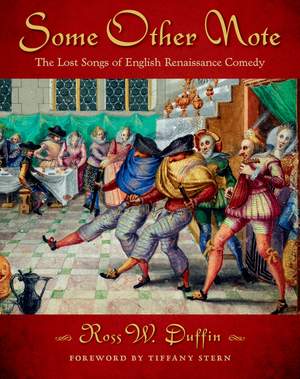 Some Other Note: The Lost Songs of English Renaissance Comedy

the author brings musical life to a large repertoire of tuneless plays ... Summing Up: Recommended. Upper-division undergraduates through faculty and professionals — Choice

English comedy from the fifteenth to the early seventeenth century abounds in song lyrics, but most of the original tunes were thought to have been lost-until now. By deducing that playwrights borrowed melodies from songs they already knew, Ross W. Duffin has used the existing English repertory of songs, both popular and composed, to reconstruct hundreds of songs from more than a hundred plays and other stage entertainments. Thanks to Duffin's incredible breakthrough, these plays have been rendered performable with period music for the first time in five hundred years. Some Other Note not only brings these songs back from the dead, but tells a thrilling tale of the investigations that unraveled these centuries-old mysteries.

the author brings musical life to a large repertoire of tuneless plays ... Summing Up: Recommended. Upper-division undergraduates through faculty and professionals