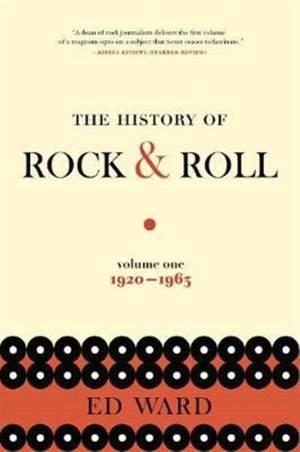 Ward's writing is deeply researched, but conversational in tone. He nerds-out just the right amount, moving briskly from hit to hit and craze to craze, slowing down only to impart a few choice... — Washington Post More…

Ed Ward covers the first half of the social history of rock & roll in this definitive book. Beginning in the 1920s when blues, country, and black popular music played over the air waves and the first independent record labels were born, this first volume of a two-part series finishes in December 1963, just as an immense sea-change begins to take hold and the Beatles prepare for their first American tour. Ward introduces you to the musicians, DJs, record executives, and producers who were at the forefront of the genre. Sharing story after story of some of the most unforgettable and groundbreaking moments in rock history, Ward reveals how different sounds, harmonies, and trends came together to create the sound we all know and love today. EdWard has been Fresh Air's rock & roll historian for the last 35 years reaching 14 million listeners. In these pages he shares his endless depth of knowledge and through engrossing storytelling hops seamlessly from Memphis to Chicago, Detroit, England, New York, and everywhere in between covering all the big- name acts everyone is already familiar with, while filling in gaps of knowledge with the more obscure and forgotten names of music's past. For all music lovers and rock & roll fans, this sweeping history will shine a light on the corners of the genre to reveal some of the less well- known yet hugely influential artists who changed the musical landscape forever.

Ward's writing is deeply researched, but conversational in tone. He nerds-out just the right amount, moving briskly from hit to hit and craze to craze, slowing down only to impart a few choice anecdotes... [his] faithful documentation of the genre's more obscure corners helps to point out that, early on, rock was weird... Ward underscores the vital point that rock was a music invented by people who knew better, but just couldn't help it