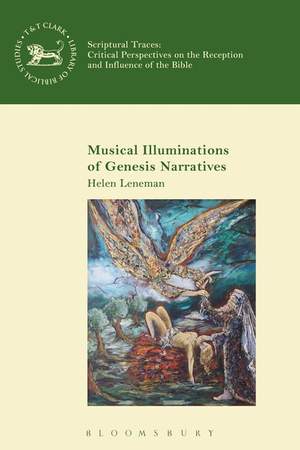 This volume examines the stories of Genesis in music, showing how musical settings can illuminate many of the Bible's most noted tales. Helen Leneman studies oratorios, operas and songs (as well as their librettos) to shed light on how Genesis has been understood and experienced over time. Examining an extensive range of musical settings of stories from the book of Genesis, Leneman offers an overview of chiefly 19th and 20th century musical engagements with this biblical text. Leneman first discusses how Eve's inner thoughts are explored by noted French composers Jules Massenet and Gabriel Faure. The text then enters the deep waters of Noah's flood in examination of several compositions, including two unusual settings by Igor Stravinsky and Benjamin Britten, as well as more conventional settings by Saint-Saens and Donizetti. Two major 19th century oratorio settings of Abraham's story by lesserknown German composers Martin Blumner and Karl Mangold provide fascinating illuminations of the Abraham narratives, whereas parts of Rebecca's story are found in works by Cesar Franck, Ferdinand Hiller, and most unusually, by a French woman composer, Celanie Carissan. Finally, Leneman shows how Joseph's story was set in numerous oratorios (including by Handel) but that one of the most important works based on his story is an opera by 18th century French composer Etienne Mehul. In addition to discussing these larger 19th century works, Leneman also examines several interesting atonal 20th century works based on the stories of Eve and the Flood, shedding new light on the history of the interpretation of the Book of Genesis.