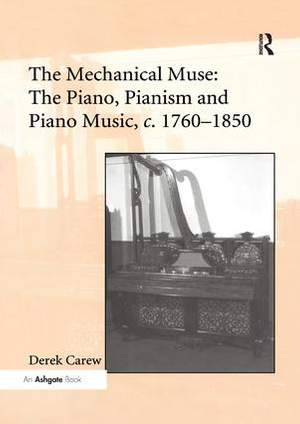 This book charts the piano's accession from musical curiosity to cultural icon, examining the instrument itself in its various guises as well as the music written for it. Both the piano and piano music were very much the product of the intellectual, cultural and social environments of the period and both were subject to many influences, directly and indirectly. These included character (individualism), the vernacular ('folk/popular') and creativity (improvisation), all of which are discussed generally and with respect to the music itself. Derek Carew surveys the most important pianistic genres of the period (variations, rondos, and so on), showing how these changed from their received forms into vehicles of Romantic expressiveness. The piano is also looked at in its role as an accompanying instrument. The Mechanical Muse will be of interest to anyone who loves the piano or the period, from the non-specialist to the music postgraduate.