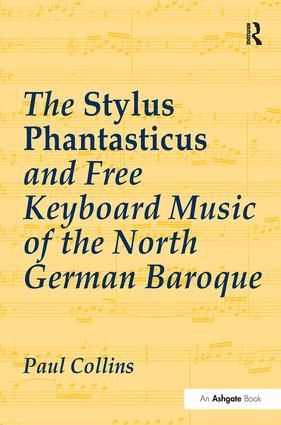 The concept of stylus phantasticus (or 'fantastic style') as it was expressed in free keyboard music of the north German Baroque forms the focus of this book. Exploring both the theoretical background to the style and its application by composers and performers, Paul Collins surveys the development of Athanasius Kircher's original concept and its influence on music theorists such as Brossard, Janovka, Mattheson, and Walther. Turning specifically to fantasist composers of keyboard works, the book examines the keyboard toccatas of Merulo, Fresobaldi, Rossi and Froberger and their influence on north German organists Tunder, Weckmann, Reincken, Buxtehude, Bruhns, Lubeck, Bohm, and Leyding. The free keyboard music of this distinguished group highlights the intriguing relationship at this time between composition and performance, the concept of fantasy, and the understanding of originality and individuality in seventeenth-century culture.