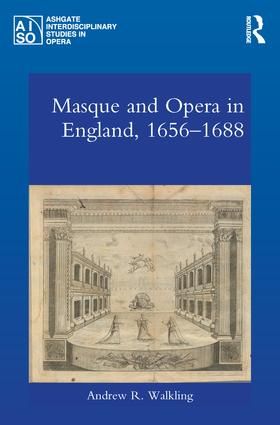 Masque and Opera in England, 1656-1688 presents a comprehensive study of the development of court masque and through-composed opera in England from the mid-1650s to the Revolution of 1688-89. In seeking to address the problem of generic categorization within a highly fragmentary corpus for which a limited amount of documentation survives, Walkling argues that our understanding of the distinctions between masque and opera must be premised upon a thorough knowledge of theatrical context and performance circumstances. Using extensive archival and literary evidence, detailed textual readings, rigorous tabular analysis, and meticulous collation of bibliographical and musical sources, this interdisciplinary study offers a host of new insights into a body of work that has long been of interest to musicologists, theatre historians, literary scholars and historians of Restoration court and political culture, but which has hitherto been imperfectly understood.

A companion volume will explore the phenomenon of "dramatick opera" and its precursors on London's public stages between the early 1660s and the first decade of the eighteenth century.