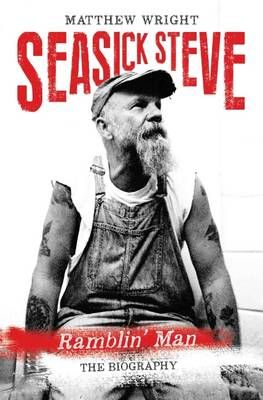 It remains one of the most remarkable breakthroughs in music history. The nervous and dishevelled figure who played his punk-blues song 'Dog House Boogie' before Jools Holland and his dumbstruck Hootenanny audience that New Year's Eve 2006 seemed to have emerged from nowhere. Apparently a sixty-five-year-old former hobo, Steve played his trademark threestring guitar (aka The Three-String Trance Wonder) and stomped on a wooden box with a Mississippi motorcycle plate stuck on (aka The Mississippi Drum Machine). His Norwegian studio had recently failed, he'd had a heart attack, and he was only known among a tiny community of hardcore blues fans, yet by the next morning he was famous. His album Dog House Music, recorded in his kitchen, sold out overnight. 2007 brought a MOJO, Reading and Glastonbury, and 2008 worldwide success and his major label debut. The rest, they say, is history. Or perhaps not. Everyone loved the grit and authenticity of Steve's songs about life on the road. His roots in the Deep South were celebrated across the media, and BBC Four took Steve round Mississippi for a documentary. But look a little closer, and a very different musical - and personal - journey rears its head. In this groundbreaking new biography, Matthew Wright draws on new information and some musical collaborators to create a startling life story, teasing out crucial details to turn the regular story of a hobo's wanderings in the wilderness on its head and bring Seasick Steve's life in from the cold. The real Steve was not a blue-collar amateur who got lucky, but a committed professional, steeped in a variety of ever-changing, era-defining musical traditions throughout his life, from the moment his dad played him boogie-woogie piano as a baby. This is a career that's touched an astonishing range of lives, from Albert King and Lighnin' Hopkins to Jimi Hendrix, from Janis Joplin to Kurt Cobain and Slash of Guns N' Roses. Ramblin' Man tells the tale of the extraordinary life of this musical polymath, as he wound a course through some of the most epochal moments in music history of the twentieth century. The myth was astonishing; the real story is even better.