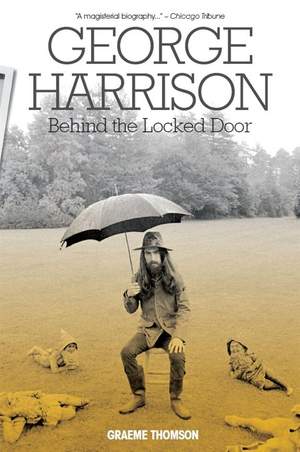 Behind The Locked Door is Graeme Thomson’s rich, insightful account of George Harrison ’s extraordinary life and career, in a new paperback edition. As a Beatle, Harrison underwent a bewilderingly compressed early adulthood, buffeted by unprecedented levels of fame and success. "Beatlemania" offered remarkable experiences and opportunities but ultimately left him unsettled and unfulfilled. His life became a quest for deeper meaning which travelled far beyond the parameters of his former band and, indeed, music itself. This elegant, in-depth biography tracks him assiduously through his many changes and conflicts, from schoolboy guitarist to global superstar, God seeker to independent filmmaker, Formula One enthusiast to UNICEF fundraiser, and marks the perennial struggle of a man attempting to walk a spiritual path lined with temptation. Drawing on scores of new interviews with close friends and collaborators, rigorous research and critical insight, Behind The Locked Door is a fascinating account of the motives and varied achievements of an often misunderstood man. It offers full analysis of Harrison’s music, including his earliest songs for The Beatles, his landmark solo album All Things Must Pass, his work with The Traveling Wilburys, and the posthumous Brainwashed, as well as his pioneering forays into Indian and electronic music. It is also an intimate character study, beautifully illustrating the eternal yin and yang of Harrison’s nature. Behind The Locked Door is the definitive account of a compelling, contradictory life.