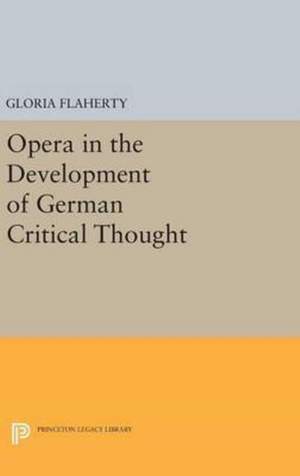 Opera in the Development of German Critical Thought

Although opera figured importantly in the French quarrel of the Ancients versus the Moderns and in the English discussions of heroic tragedy, it was in Germany that its role in the development of criticism and aesthetics was most pronounced. Beginning with this observation, Gloria Flaherty tries to show how, from its very inception and through most of its history, opera was related not only to the revival of ancient drama and the evolution of modern theater, but also to the development of modern critical thought. The author provides a comprehensive treatment of the writings both for and against the operatic forms that dominated seventeenth- and eighteenth-century German theater. Included in her focus are the academic critics who denounced the failure of opera to comply with universally valid standards of beauty and the rules of drama; the various sermonizers who condemned opera's excessive emphasis on the senses and preached total abstinence; and the theatrical artists and patrons as well as the innumerable poets, philosophers, and writers who upheld the freedom to experiment and defended opera as a modern theatrical form with nearly unlimited artistic possibilities. As a result of these controversies, the defense of opera helped to shape a distinctively German version of the classical ideal, enriched German criticism with new vocabulary, promoted the study of the performing arts, and emphasized music and spectacle as essential components of theater. Originally published in 1979. The Princeton Legacy Library uses the latest print-on-demand technology to again make available previously out-of-print books from the distinguished backlist of Princeton University Press. These editions preserve the original texts of these important books while presenting them in durable paperback and hardcover editions. The goal of the Princeton Legacy Library is to vastly increase access to the rich scholarly heritage found in the thousands of books published by Princeton University Press since its founding in 1905.