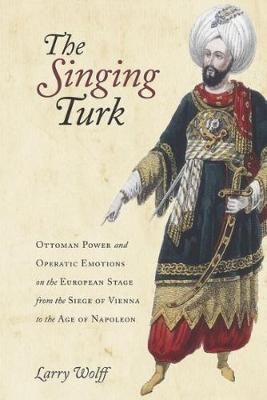 The Singing Turk: Ottoman Power and Operatic Emotions on the European Stage from the Siege of Vienna to the Age of Napoleon

While European powers were at war with the Ottoman Empire for much of the eighteenth century, European opera houses were staging operas featuring singing sultans and pashas surrounded by their musical courts and harems. Mozart wrote The Abduction from the Seraglio. Rossini created a series of works, including The Italian Girl in Algiers. And these are only the best known of a vast repertory. This book explores how these representations of the Muslim Ottoman Empire, the great nemesis of Christian Europe, became so popular in the opera house and what they illustrate about European-Ottoman international relations.

After Christian armies defeated the Ottomans at Vienna in 1683, the Turks no longer seemed as threatening. Europeans increasingly understood that Turkish issues were also European issues, and the political absolutism of the sultan in Istanbul was relevant for thinking about politics in Europe, from the reign of Louis XIV to the age of Napoleon. While Christian European composers and publics recognized that Muslim Turks were, to some degree, different from themselves, this difference was sometimes seen as a matter of exotic costume and setting. The singing Turks of the stage expressed strong political perspectives and human emotions that European audiences could recognize as their own.