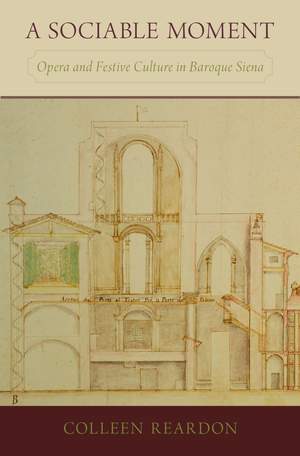 A Sociable Moment: Opera and Festive Culture in Baroque Siena

Throughout A Sociable Moment, a plethora of archival sources support an engaging account of Sienese opera in late seventeenth and early eighteenth centuries. Most importantly, Reardon establishes... — Notes: Journal of the Music Library Association More…

After their military defeat by the Florentines in the mid-sixteenth century, the citizens of Siena turned from politics to celebratory, social occasions to express their civic identity and show their capacity for collective action. In the first major work of its kind, Colleen Reardon opens a window on the ways in which the Sienese absorbed the new genre of opera into their own festive apparatus and challenges the prevailing view that operatic productions in the city were merely an extension of Medici power to the provinces. It was, rather, members of the expatriate Chigi family who exploited the festive impulse of their countrymen, coordinating operatic performances with their triumphant visits home by activating ties of friendship and family as well as connections to Sienese institutions, most notably the Assicurate, possibly the first all-female academy in Italy. If the Chigi proved successful at inserting opera into larger patterns of sociability that conveyed the very essence of what it meant to be Sienese (senesita), their successor, the flamboyant playwright and librettist Girolamo Gigli, struggled in his attempts to transform operatic performances into professional enterprises. Fluidly written and richly embellished with anecdotes from historical chronicles, A Sociable Moment offers insight into the Sienese experience with opera during the genre's rapid expansion throughout the Italian peninsula during the late seventeenth and early eighteenth centuries.

Throughout A Sociable Moment, a plethora of archival sources support an engaging account of Sienese opera in late seventeenth and early eighteenth centuries. Most importantly, Reardon establishes Siena as its own, distinct opera center characterized by the roles assumed by members of its patrician class as financiers, impresarios, and musicians Reardon provides a colorful and detailed account of operatic life in the Tuscan city