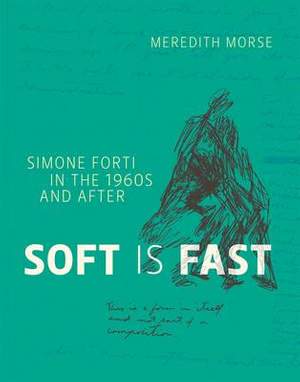 Soft is Fast: Simone Forti in the 1960s and After

Simone Forti's art developed within the overlapping circles of New York City's advanced visual art, dance, and music of the early 1960s. Her "dance constructions" and related works of the 1960s were important for both visual art and dance of the era. Artists Robert Morris and Yvonne Rainer have both acknowledged her influence.

Forti seems to have kept one foot inside visual art's frames of meaning and the other outside them. In Soft Is Fast, Meredith Morse adopts a new way to understand Forti's work, based in art historical analysis but drawing upon dance history and cultural studies and the history of American social thought. Morse argues that Forti introduced a form of direct encounter that departed radically from the spectatorship proposed by Minimalism, and prefigured the participatory art of recent decades.

Morse shows that Forti's work negotiated John Cage's ideas of sound, score, and theater through the unique approach to movement, essentially improvisational and grounded in anatomical exploration, that she learned from performer and teacher Ann (later Anna) Halprin. Attentive to Robert Whitman's and La Monte Young's responses to Cage, Forti reshaped Cage's concepts into models that could accommodate Halprin's charged spaces and imagined, interpenetrative understanding of other bodies.

Morse considers Forti's use of sound and her affective use of materials as central to her work; examines Forti's text pieces, little discussed in art historical literature; analyzes Huddle, considered one of Forti's signature works; and explicates Forti's later improvisational practice.

Forti has been relatively overlooked by art historians, perhaps because of her work's central concern with modes of feeling and embodiment, unlike other art of the 1960s, which was characterized by strategies of depersonalization and affectlessness. Soft Is Fast corrects this critical oversight.