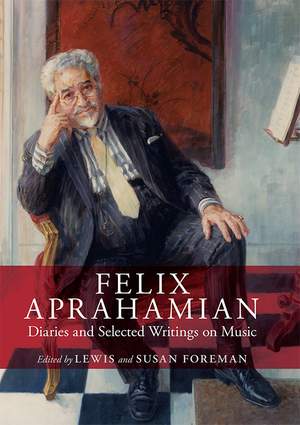 The music critic Felix Aprahamian (1914-2005) was a remarkable self-made man whose enormous influence in musical circles was deeply founded in his practical experience of promoting music in London, notably British and French composers. Early on he became interested in the organ and was soon corresponding with the leading French names of the day - André Marchal, Charles Tournemire, Maurice Duruflé and the young Olivier Messiaen. In 1933, the nineteen-year-old Aprahamian visited Frederick Delius in France, and while in Paris, met the aged Charles-Marie Widor. The surviving diaries, published here complete for the first time, document these events in detail.  During the Second World War he acted as concert director of the London Philharmonic Orchestra, was the guiding spirit behind the influential Concerts de Musique Française and became assistant to Sir Thomas Beecham. After the liberation of Paris, a wide circle of outstanding French musicians and composers including Francis Poulenc, Messiaen, Pierre Bernac and Pierre Fournier became personal friends. Aprahamian made his name as music critic on The Sunday Times, where from 1948to 1989 he was required reading. He helped numerous young musicians to develop their careers and was associated with many musical organizations, notably the Delius Trust and Society.  Prefaced by an illuminating biography, this collection sheds new light on Aprahamian's life and work. His diaries and BBC broadcasts uniquely illuminate London concert life from the 1930s to the 1960s, while his articles on many composers and musicians - nearly all friends and colleagues - testify to his promotion of French and British music. Examples of his record and concert reviews are included, and the book evokes the almost vanished world of a music criticism both humane and strict, paying tribute to music's spontaneous and absolute qualities. It will be of interest to anyone following London concert life in the twentieth century; British and French music; writing about Debussy, Poulenc, Messaien and, in particular,Delius; as well as organ music.   LEWIS FOREMAN is a writer on British music and the editor of The John Ireland Companion (The Boydell Press, 2011) and author of Bax: A Composer and His Times.SUSAN FOREMAN is author of various books on Whitehall and, together with Lewis Foreman, London. A Musical Gazetteer (2005).