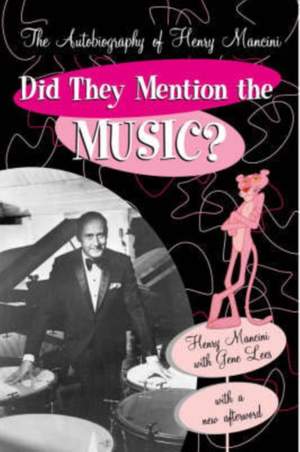 Did They Mention the Music?: The Autobiography of Henry Mancini

Best known for the "dead-ant" theme to the Pink Panther films, Henry Mancini also composed the music to Peter Gunn, Breakfast at Tiffany's, Orson Welles' Touch of Evil, and the Academy Award winning soundtracks to Victor/Victoria and The Days of Wine and Roses. In a career that lasted over thirty years, Mancini amassed twenty Grammy awards and more nominations than any other composer. In his memoir, written with jazz expert Lees, Mancini discusses his close friendships with Blake Edwards, Julie Andrews, and Paul Newman, his professional collaborations with Johnny Mercer, Luciano Pavarotti, and James Galway, and his achievements as a husband, father, and grandfather. A great memoir loaded with equal parts Hollywood glitz and Italian gusto.