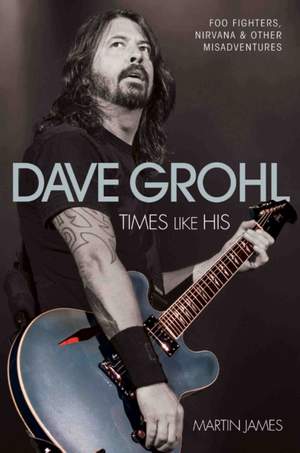 Dave Grohl: Times Like His: Foo Fighters, Nirvana and Other Misadventures

Foo Fighters emerged from the morass of suicide and potent musical legacy that was Nirvana to establish themselves against all odds as one of the most popular rock bands in the world. Deflecting early critical disdain, Dave Grohl has single-handedly reinvented himself and cemented his place in the rock pantheon. This is his story, from his pre-Nirvana days in hardcore band Scream to his current status as a festival conquering, Grammy winning, platinum-selling grunge legend. Across the entire body of Foo Fighters albums, the whole legendary Nirvana tale, the pre-history in the nascent Seattle scene and Grohl's flirtations with Queens of the Stone Age and his supergroup side-project Them Crooked Vultures, this is an utterly comprehensive, insightful chronicle of Dave Grohl's remarkable life. Drawing on new interviews with key figures in the Grohl story, this definitive biography of one of modern rock's most influential figures includes the stories of the multi-platinum opus Echoes, Silence, Patience and Grace, 2011's Wasting Light, which saw Grohl reunited with Nirvana producer Butch Vig and Sonic Highways, their ambitious homage to coast-to-coast US classic rock.