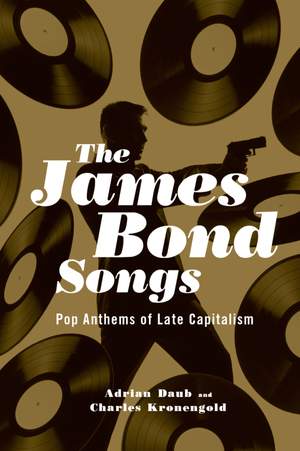 Starting with 1964's Goldfinger, every James Bond film has followed the same ritual, and so has its audience: after an exciting action sequence the screen goes black and the viewer spends three long minutes absorbing abstract opening credits and a song that sounds like it wants to return to 1964. In The James Bond SongsR authors Adrian Daub and Charles Kronengold use the genre to trace not only a changing cultural landscape, but also evolving conceptions of what a pop song is. They argue that the story of the Bond song is the story of the pop song more generally, and perhaps even the story of its end. Each chapter discusses a particular segment of the Bond canon and contextualizes it in its eras music and culture. But the book also asks how Bond and his music reflected and influenced our feelings about such topics as masculinity, race, money, and aging. Through these individual pieces the book presents the Bond song as the perfect anthem of late capitalism. The Bond songs want to talk about the fulfillment that comes from fast cars, shaken Martinis and mindless sex, but their unstable speakers, subjects, and addressees actually undercut the logic of the lifestyle James Bond is sworn to defend. The book is an invitation to think critically about pop music, about genre, and about the political aspects of popular culture in the twentieth century and beyond.