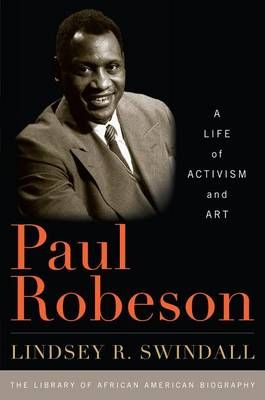 Paul Robeson: A Life of Activism and Art

Paul Robeson: A Life of Activism and Art is the biography of an African American icon and a demonstration of historian Lindsey R. Swindall's knack for thorough, detailed research and reflection. Paul Robeson was, at points in his life, an actor, singer, football player, political activist and writer, one of the most diversely talented members of the Harlem Renaissance. Swindall centers Robeson's story around the argument that while Robeson leaned toward Socialism, a Pan-African perspective is fundamental to understanding his life as an artist and political advocate. Many previous works on Robeson have focused primarily on his involvement with the US Communist Party, paying little attention to the broader African influences on his politics and art. With each chapter focused on a decade of his life, this book affords us a fresh look at his story, and the ways in which the struggles, successes and studies of his formative years came to shape him as an artist, activist and man later on. Robeson's story is one not simply of politics and protest, but of a man's lifelong evolution from an athlete to an entertainer to an indispensible man of letters and African American thought. Swindall neatly outlines the events of Robeson's life in a way that freshly presents him as a man whose work was influenced by more than just his circumstances, but by a spirit rooted in dedication to the African's place in American art and politics.

Swindall's concise biography is a great introduction to this iconic African American artist, athlete, and activist. Swindall (Sam Houston State Univ.) contextualizes Robeson's life within larger global, political, and racial spheres, stressing that "the African diaspora, its culture, people and politics, was at the heart of his artistic career and political activism." The author draws heavily on existing secondary sources, including biographies by Martin Duberman (Paul Robeson, 1989) and Paul Robeson Jr. (The Undiscovered Paul Robeson, CH, Sep'01, 39-0207), as well as from earlier works and primary sources, but does not footnote in a traditional academic way. This is problematic at times. Swindall relies heavily on the Daily Worker and other communist or communist-influenced publications, yet fails to identify this political affiliation. While Robeson was certainly the target of rabid political attacks and the mainstream media contributed to this pillorying, a more balanced primary and secondary form of documentation would have added to the work. However, Swindall aptly demonstrates Robeson's remarkable multifaceted career, including politics and his stage and field successes. The author does not shy away from Robeson's psychological problems in the final quarter of his life. Overall, a fine introduction to Robeson that stresses his life as a public figure. Summing Up: Recommended. All levels/libraries