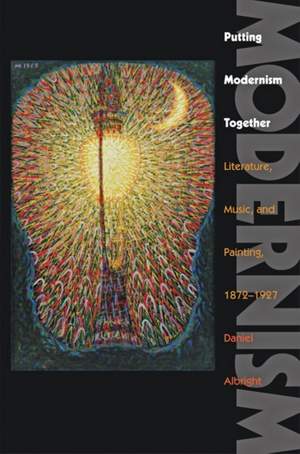 How do you rationally connect the diverse literature, music, and painting of an age? Throughout the modernist era-which began roughly in 1872 with the Franco-Prussian War, climaxed with the Great War, and ended with a third catastrophe, the Great Depression-there was a special belligerence to this question. It was a cultural period that envisioned many different models of itself: to the Cubists, it looked like a vast jigsaw puzzle; to the Expressionists, it resembled a convulsive body; to the Dadaists, it brought to mind a heap of junk following an explosion. In Putting Modernism Together, Daniel Albright searches for the center of the modernist movement by assessing these various artistic models, exploring how they generated a stunning range of creative work that was nonetheless wound together aesthetically, and sorting out the cultural assumptions that made each philosophical system attractive. Emerging from Albright's lectures for a popular Harvard University course of the same name, the book investigates different methodologies for comparing the evolution and congruence of artistic movements by studying simultaneous developments that occurred during particularly key modernist years. What does it mean, Albright asks, that Joseph Conrad's Heart of Darkness, published in 1899, appeared at the same time as Claude Debussy's Nocturnes-beyond the fact that the word "Impressionist" has been used to describe each work? Why, in 1912, did the composer Arnold Schoenberg and the painter Vassily Kandinsky feel such striking artistic kinship? And how can we make sense of a movement, fragmented by isms, that looked for value in all sorts of under- or ill-valued places, including evil (Baudelaire), dung heaps (Chekhov), noise (Russolo), obscenity (Lawrence), and triviality (Satie)? Throughout Putting Modernism Together, Albright argues that human culture can best be understood as a growth-pattern or ramifying of artistic, intellectual, and political action. Going beyond merely explaining how the artists in these genres achieved their peculiar effects, he presents challenging new analyses of telling craft details which help students and scholars come to know more fully this bold age of aesthetic extremism.