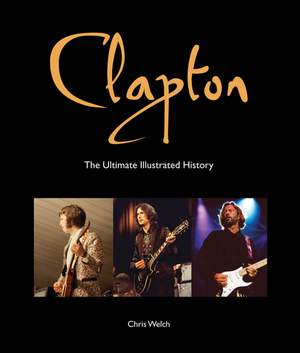 He was born Eric Patrick Clapton, but you can just call him “Slowhand.” Over the years, fans of Eric Clapton have debated the high points of an epic career in blues and rock 'n' roll spanning nearly fifty years. Which song best epitomizes Clapton's skills as a songwriter? Which era – the Yardbirds, Cream or his solo work – stands about above the rest? Where does Clapton rank on the list of all-time guitar greats? Whatever your opinions may be, one thing is for sure: few artists have contributed as much to the world of music as the six-string magician from Ripley. Put simply, one look at Clapton's five-decade-long résumé is enough to blow any rock 'n' roll junkie's mind. It includes time with the Yardbirds, John Mayall's Bluesbreakers, Cream, Blind Faith, the Plastic Ono Band, Bonnie & Delaney, Derek and the Dominoes, and his own solo discography, not to mention his Crossroads festivals and appearances at the Concert for Bangladesh, the Last Waltz, Live Aid, the Secret Policeman's Other Ball, and so much more. Along the way, Clapton has won seven Grammy Awards and eighteen gold, eight platinum, and seven multi-platinum albums – including one ten-times platinum LP. If that weren't enough, he's also the only musician to have been inducted in the Rock 'n' Roll Hall of Fame three times – as a solo performer and as a member of the Yardbirds and Cream.

From respected author and rock journalist Chris Welch, Clapton: The Ultimate Illustrated History is a beautifully illustrated celebration of all things Clapton. Packed with more than 400 photographs, guitars, concert posters, and other memorabilia, this first-of-its kind book also houses eleven chapters following Clapton's remarkable career – from its earliest days to his various work in several now-legendary bands to his stunning solo career. Also included is a wealth of sidebars covering the gear Clapton has used through the years, as well as extensive appendices detailing his complete discography.