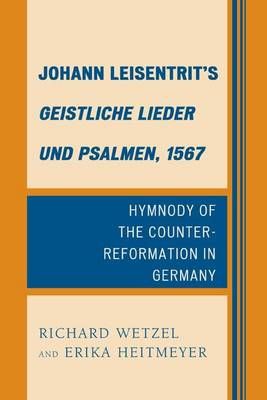 Geistliche Lieder und Psalmen, 1567, was compiled and published by Johann Leisentrit, a Roman Catholic priest who from 1559 to the time of his death in 1586, was Dean at the Cathedral of St. Peter's in Bautzen, a town in southeastern Germany. His hymnbook appeared in three complete editions (1567, 1573, 1584), and in abridged editions in 1575, 1576, and 1589. By adapting the vernacular hymn, a genre created by Protestant reformers, Leisentrit hoped to bring back to the "true church" (wahrglaubiger Christlicher Kirchen) those who had defected to Lutheranism. This was a formidable ambition because his diocese was located adjacent to the Moravian-Bohemian regions where the Protestant movement was born and remained vital. Containing approximately 260 texts set to 175 notated melodies, many borrowed from Protestant sources and adapted to serve Roman Catholic objectives, Leisentrit's book was the second Catholic hymnbook to be published in the sixteenth century. It surpassed its Protestant and Catholic precursors in scope and provided a model for the profusion of hymnbooks of numerous confessions that appeared in Germany in the seventeenth and eighteenth centuries . Wetzel and Heitmeyer present their study in two parts: The first comprises six contextual chapters that survey earlier German achievements in hymnody, provide analyses of the texts and music in Leisentrit's book, and assess his achievement within the volatile environment of the Counter Reformation. The second gives the melodies in modern notation along with the first stanzas of the texts; provides detailed concordances and references to sources that identify textual and musical provenances; and concludes with six appendixes to facilitate scholarly cross-references. Fourteen of the seventy wood engravings from Leisentrit's book, many of which are visual representations of the prevailing confessional conflicts, are given in enlarged reproductions. The authors provide the only comprehensive study in English of a unique religious figure and his efforts to achieve confessional reconciliation in the decades following the Council of Trent. They add to a more accurate interpretation of the relationship between Lutherans and Catholics in the sixteenth century and support the hypothesis that some Lutherans remained more liturgically formal than their Catholic contemporaries.