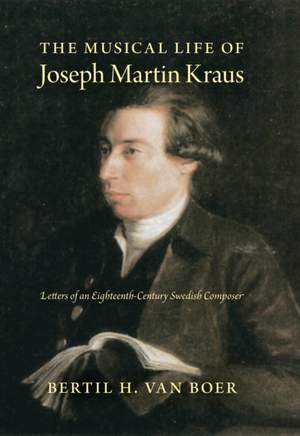 The Musical Life of Joseph Martin Kraus: Letters of an Eighteenth-Century Swedish Composer

Van Boer's translation is most readable . . . One hopes these letters will get people interested in the musical culture of the late 18th century outside the musical hot-house of Vienna. Jospeh... — Fanfare More…

Joseph Martin Kraus (1756-1792) led an illustrious, if brief, career as an acclaimed composer in the age of Haydn and Mozart. At 26 he embarked on a four-year European grand tour that secured his reputation as musician and composer. Like Mozart, Kraus was a prolific correspondent. His letters to his family give an unusually intimate picture of the private man, showing a slice of domestic life in the 18th century among the emerging middle class. These letters include one of the few descriptions of the great Handel Centenary Festival from an outsider, critiques of the operas performed in Paris by Piccinni, the first mention in history of Mozart's Le Nozze di Figaro, and descriptions of the art and archeology of Pompeii. These documents are as crucial to understanding Kraus's life and works as they are revelatory of a composer's milieu in the 18th century.

Van Boer's translation is most readable . . . One hopes these letters will get people interested in the musical culture of the late 18th century outside the musical hot-house of Vienna. Jospeh Martin Kraus will be a charming guide.May/June 2015