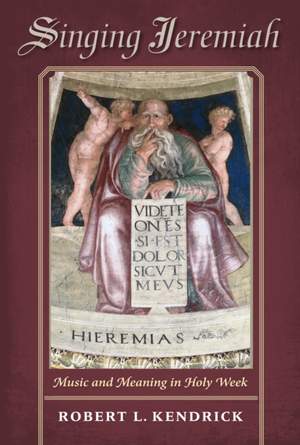 This a stunning piece of scholarship centered around a specific ritual in Western society and Christianity, and the music associated with it. Highly recommended — Choice More…

A defining moment in Catholic life in early modern Europe, Holy Week brought together the faithful to commemorate the passion, crucifixion, and resurrection of Jesus Christ. In this study of ritual and music, Robert L. Kendrick investigates the impact of the music used during the Paschal Triduum on European cultures during the mid-16th century, when devotional trends surrounding liturgical music were established; through the 17th century, which saw the diffusion of the repertory at the height of the Catholic Reformation; and finally into the early 18th century, when a change in aesthetics led to an eventual decline of its importance. By considering such issues as stylistic traditions, trends in scriptural exegesis, performance space, and customs of meditation and expression, Kendrick enables us to imagine the music in the places where it was performed.

This a stunning piece of scholarship centered around a specific ritual in Western society and Christianity, and the music associated with it. Highly recommended

Robert Kendrick has provided the interested reader with a huge amount of information, with great cultural-historical, and not least music-historical perspectives. It is an important book, which takes seriously the idea that liturgical music was also-and remains-theological, cultural, and ritual practice