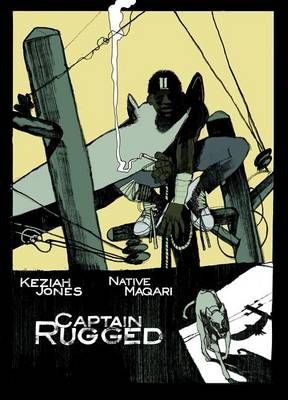 Captain Rugged is a multimedia project collaboration between 2 Nigerian artists: Keziah Jones and Native Maqari. The book is a graphic novel and will come out with a special music card that will contain the url to download the tracks of Keziah Jones' CD album of the same name. The two artists have witnessed the most transformative stories happening within and around them in the city of Lagos so it was inevitable that they both attempted to put this into words and image and sound for an outside audience in order that they might also get an idea of the character of the city. After the oil boom years of the '70's, visually, Lagos resembled what can only be described as an unfinished African utopia; grand projects lay abandoned and subsequently taken over by the homeless, grand motorways that span the lagoons surrounding the islands of Lagos overrun by hastily constructed shanty towns on stilts. The city became both futuristic and of the past at the same time. Captain Rugged is set amongst the teeming masses that live in these in-between places. The only protagonist that Keziah and Native could conceive of who was surviving on his own terms in this type of environment was a superhero. This is due to the fact of the unending harshness of the daily grind of the inhabitants. But daily grind can also be experienced as transcendence, because at the end of every day Lagosians will sit down and ease away their troubles by recounting, to whomever will listen, the numerous surprising and amazing things they have seen over a beer and some music. For both artists the city of Lagos will never cease to amaze, therefore it was not surprising that a superhero called Captain Rugged would appear, because if they didn't invent him someone else would have.