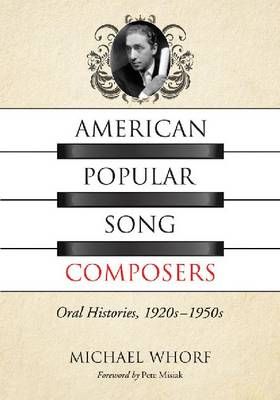 The first half of the twentieth century was filled with drama, excitement, heartbreak and joy--emotions that all fed into the themes of America's popular music. This two-volume history contains biographies the leading American composers and lyricists, the gifted men and women who wrote the great popular songs from the 1920s to the 1960s. Featured in this volume are interviews with many of the legendary composers from Tin Pan Alley, Hollywood and Broadway, among them Harold Arlen, Eubie Blake, Cy Coleman, George Duning, Sammy Fain, Jerry Herman, Bronislaw Kaper, Henry Mancini, David Rose, Arthur Schwartz, Charles Strouse, Jule Styne, Jimmie Van Heusen, Harry Warren, Richard Whiting, and Meredith Willson. Included are photographs and rare sheet music reproductions, as well as fascinating information on the stories behind the songs.