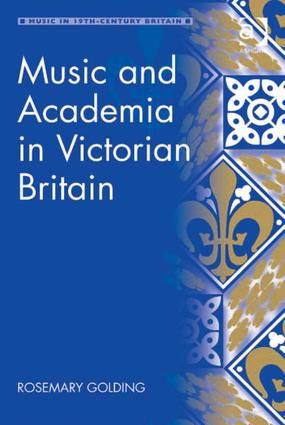 Music and Academia in Victorian Britain

Until the nineteenth century, music occupied a marginal place in British universities. Degrees were awarded by Oxford and Cambridge, but students (and often professors) were not resident, and there were few formal lectures. It was not until a benefaction initiated the creation of a professorship of music at the University of Edinburgh, in the early nineteenth century, that the idea of music as a university discipline commanded serious consideration. The debates that ensued considered not only music's identity as art and science, but also the broader function of the university within education and society. Rosemary Golding traces the responses of some of the key players in musical and academic culture to the problems surrounding the establishment of music as an academic discipline. The focus is on four universities: Edinburgh, Oxford, Cambridge and London. The different institutional contexts, and the approaches taken to music in each university, showcase the various issues surrounding music's academic identity, as well as wider problems of status and professionalism. In examining the way music challenged conceptions of education and professional identity in the nineteenth century, the book also sheds light on the way the academic study of music continues to challenge modern approaches to music and university education.

Deft handling of abundant archive material, woven into a tight, instructive narrative, brings to the fore the two issues about music's identity and status that drive the author's principal themes: art or science? professional or liberal form of study