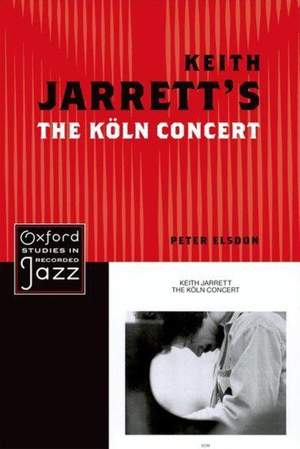 Elsdon is very good at exploring the recurring motifs and styles of Jarretts improvisations, his rhapsodic virtuosity, lengthy groove passages ... He is strong on the theory of music and its... — Jazz Journal More…

Keith Jarrett ranks among the most accomplished and influential pianists in jazz history. His Koeln Concert stands among the most important jazz recordings of the past four decades, not only because of the music on the record, but also because of the remarkable reception it has received from musicians and lay-listeners alike. Since the album's 1975 release, it has sold over three million copies: a remarkable achievement for any jazz record, but an unprecedented feat for a two-disc set of solo piano performances featuring no well-known songs. In Keith Jarrett's The Koeln Concert, author Peter Elsdon seeks to uncover what it is about this recording, about Keith Jarrett's performance, that elicits such success. Recognizing The Koeln Concert as a multi-faceted text, Elsdon engages with it musically, culturally, aesthetically, and historically in order to understand the concert and album as a means through which Jarrett articulated his own cultural and musical outlook, and establish himself as a serious artist. Through these explorations of the concert as text, of the recording and of the live performance, Keith Jarrett's The Koeln Concert fills a major hole in jazz scholarship, and is essential reading for jazz scholars and musicians alike, as well as Keith Jarrett's many fans.

Elsdon is very good at exploring the recurring motifs and styles of Jarretts improvisations, his rhapsodic virtuosity, lengthy groove passages ... He is strong on the theory of music and its performance