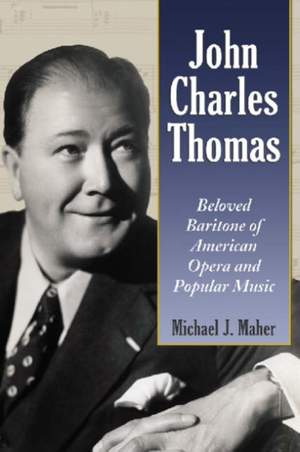 Buoyant, irrepressible and hot-tempered, John Charles Thomas captivated audiences worldwide with his incredible voice. The son of a farmer, his earliest singing experience was at church revivals. He attended the Peabody Conservatory in Baltimore and in 1910, as Thomas began his second year of study, he was taken under the tutelage of Adelin Fermin, one of the few voice coaches in America capable of truly training Thomas' voice. This good fortune virtually made Thomas' career. By 1915, he was working on Broadway and less than a decade later he embarked on a trans - Atlantic life with bases in Paris, Brussels, London, New York and Palm Beach. The height of his popularity came from 1934 to 1946. Thomas was always a favorite with his audiences even though critics condemned him for his practice of including popular music in his concerts. By the mid - 1940s, this tendency had earned Thomas a reputation as a popular singer rather than a serious artist. The changing face of the music industry during the early 1950s and the ensuing sharp decline in audiences for concert singers such as Thomas resulted in slow, painful end to his career as he gradually faded into the background of the musical world. This biography details the life and career of John Charles Thomas, from operatic performances to concerts and radio broadcasts. Beginning with his school days at the Peabody, it follows Thomas to his work on Broadway, where he appeared in productions such as ""Alone at Last"" and ""Step This Way"". Additional topics include Thomas' movement to an intercontinental operatic career, his unprecedented success at the Metropolitan Opera, and the lifelong encouragement given him by his voice coach. Thomas' constant challenge of critics through his inclusion of popular music is also discussed. Appendices provide a discography of initial releases, a list of operatic appearances in Brussels and the United States and detailed information on his Westinghouse radio series.