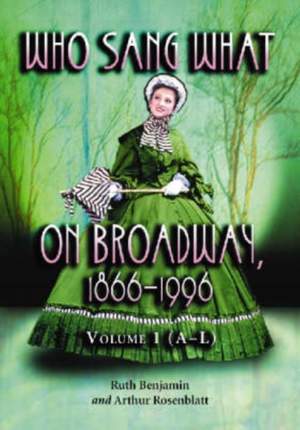 Hours of lost sleep with a tune running around one's head - and that voice. Whose is it, and from which Broadway production? Debates over a performer's repertoire devolving into acid arguments, blows traded, friendships torn asunder. Must the maddening question of exactly who sang just what continue? It cannot - thanks to this book, it shall not. This massive compendium lists alphabetically every performer who sang on Broadway in the part of a named character, earning mention in the program of a musical or revue. Covering the period of 1866 to 1996, it is an invaluable guide to performances by the well-known and the obscure, the career stage performers as well as the one-timers whose names never again graced a playbill. Performers' entries include date and place of birth, date of death, marital status, names of performing relatives or partners appearing in the book, and brief career highlights. Details of specific performances follow, beginning with the musical; the venue or venues at which it played; the character and the dates of portrayal; the title of the songs performed; the lyricists and composers of each song and more. Indices, one of show and song titles, the other of composers and lyricists, allow for easy cross-referencing. A select bibliography is included.