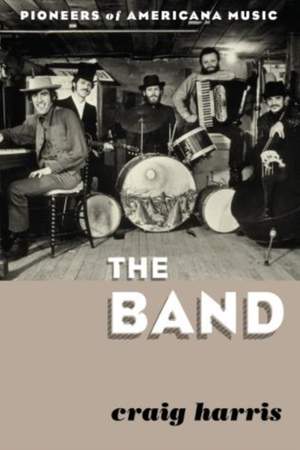 The Band: Pioneers of Americana Music

It is difficult, if not impossible or inadvisable, to consider Bob Dylan and The Band separately. Theirs was an artistic event horizon that changed much of music afterwards. Writer and percussionist... — All About Jazz More…

At a time when Acid Rock and Heavy Metal dominated popular music, The Band rebelled against the rebellion with a masterful mix of tight ensemble arrangements, great vocals, highly literate lyricism, and a respect for the musical traditions of the American South. Comprising Canadians Robbie Robertson, Rick Danko, Richard Manuel, and Garth Hudson, and Arkansas-born Levon Helm, The Band sparked a new appreciation for America's musical roots, fusing R&B, jump blues, country, folk, boogie-woogie, swing, Cajun, New Orleans-style jazz, and rock, and setting the foundations for the Americana craze that would take hold 30 years later. The Band: Pioneers of Americana Music explores the diverse influences on the quintet's music, and the impact that their music had in turn on contemporary music and American society. Through previously unpublished interviews with Robbie Robertson, Eric Andersen, Pete Seeger, and the late Rick Danko, as well as numerous other sources, Craig Harris surveys The Band's musical journey from sidemen for, among others, Ronnie Hawkins and Bob Dylan, to rock legends in their own right. The book touches on the evolution of rock and roll, the electrifying of folk music, unionism, and Civil Rights Movement, the growth of America's musical roots, changes in radio formatting, changing perceptions of the American south, and the commercializing of the counter-culture, as well as drug dependency, alcoholism, suicide, greed, and the struggle against cancer. Harris takes readers through The Band's albums, from Music from Big Pink and The Band to their final releases and solo recordings, as well as their historic appearances at Woodstock, Isle of Wight (with Dylan), Watkins Glen (with the Allman Brothers Band and the Grateful Dead), and the Last Waltz (with an all-star cast) and participation in the Festival Express. This biography is a must-have publication, not only for fans, but also for anyone interested in music history. Craig Harris sets the record straight as he shares the story of this incredibly influential rock act.

It is difficult, if not impossible or inadvisable, to consider Bob Dylan and The Band separately. Theirs was an artistic event horizon that changed much of music afterwards. Writer and percussionist Craig Harris has lovingly committed to pixels The Band: Pioneers of American Music, the thoroughly researched and considered story of the Band, and necessarily, its relationship with Dylan. In doing so, he gives a succinct history of the surrounding aural terrain: Arkansas Delta Blues, singer Ronnie Hawkins, late-1950s' territory bands, Dylan's 1965 electric-acoustic schism, the rise of FM AOR (album-oriented rock) dominance in the early 1970s and essential ephemera like that. Harris' writing style is very user friendly. While his in-text references are voluminous, they never get in the way of the writing or the story he tells. Neither does his impressive research ever bog down the reading. He has honed his story to the bare essentials and in doing so, show the bright gleam of that brief decade that defined and then changed so much of American popular music. . . . The importance of the band cannot be overstated and Harris' taut account does the band proper justice