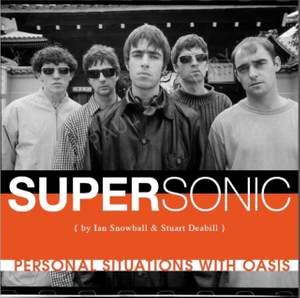 Supersonic: Personal Situations With Oasis (1992-96) charts the Manchester band's meteoric rise from the tiny venues of their hometown to playing to 250,000 people over two days in the Summer of 1996, as told by the fans and people who worked closely with the band during these formative years. The book features unseen photos and unheard stories as the authors Deabill and Snowball take the reader back to the nights of riotous gigs, Definitely Maybe, Oasis vs Blur, the mammoth-selling second album What's The Story (Morning Glory) and how over an eighth of the UK's population applied for tickets for the band's record-breaking gigs at Knebworth. Headed by the brothers Liam and Noel Gallagher, Oasis made guitars cool again, put attitude back in the charts and saw their music reach all four corners of the globe with swagger and style. This is the real story of the early days of rock and roll's last stand.