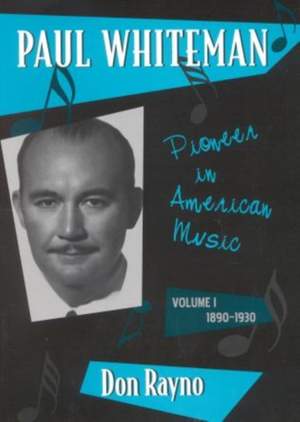 Rayno describes [this book] as "a vigorous attempt to set the record straight." The attempt is unarguably successful — Mississippi Rag

When Paul Whiteman, the best-known dance band leader of the flapper age, brought his entourage to town it was a big deal. Mayors met him at the train station and presented him with the key to the city, parades and throngs of cheering crowds escorted him to City Hall, and special luncheons were held in his honor. Eventually dubbed the "King of Jazz," Whiteman grew into one of the biggest promoters of players, singers, and arrangers of all times. Many well-known musicians got their first big boost in his band including Tommy and Jimmy Dorsey, Bing Crosby, Frank Trumbauer, Bix Beiderbecke, Johnny Mercer, Mildred Bailey, and Ferde Grofe. When it came to jazz, Whiteman was a trailblazer. He invented "symphonic jazz" and gave the first performance of Gershwin's Rhapsody in Blue, one of the most enduringly popular of all jazz-influenced musical works of the 20th century. He perfected the one-nighter concert tours, traveling across the country by train, from city to city, with his unique brand of music. He was also the first to employ a special arranger to craft tailor-made charts to fit the Whiteman Orchestra's instrumentation and sound. This is the first of a two-volume set that will serve as the definitive work on the life and music of this legendary jazz leader. Covering the early years from 1890 to 1930, the text will entertain and inform the reader about the exciting life of one of the major influencers of jazz music and also provide a nostalgic glimpse of what life was like during the Roaring Twenties. Features: * Day-by-day chronology 1890-1930 * Comprehensive discography of recordings 1920-1930 * Gallery of Whiteman's band members-alphabetical listing from 1918 to 1930 (includes birth and death dates) * Detailed reference notes with biographical sketches of famous people * Extensive bibliography and index, including index of songs * Nearly 60 rare, black and white photos

Rayno describes [this book] as "a vigorous attempt to set the record straight." The attempt is unarguably successful