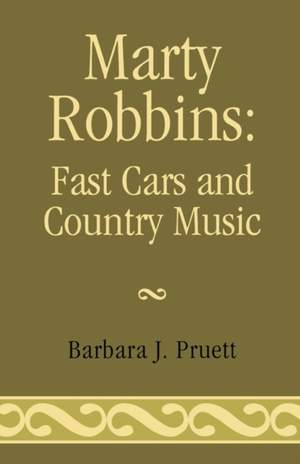 From his first performance in the late 1940s until his early death in 1982, Marty Robbins established himself as one of the most popular and successful singer/songwriters in the latter half of the 20th century. On the country charts, he racked up 15 #1 hits, including the crossover smashes El Paso and A White Sport Coat (and a Pink Carnation). A beloved entertainer, Robbins received honors from every major music association. El Paso became the first Grammy ever awarded to a Country song, while My Woman My Woman My Wife received the 1970 Grammy for Best Country Song. In 1969 Robbins was named artist of the decade by the Academy of Country Music. He was inducted into the Nashville Songwriters Hall of Fame in 1975 and the Country Music Hall of Fame in 1982. In addition to his success as a singer/songwriter, Robbins loved car racing. In the early 1970s he joined the NASCAR circuit and raced the rest of his life. In Marty Robbins: Fast Cars and Country Music, author Barbara J. Pruett provides an exhaustive overview of Robbins' life and career. Nearly half of the book is a chronological listing (starting in 1948) of more than 2,000 magazine and newspaper articles and other sources of information about Robbins. Another section provides a basic discography of his hundreds of recordings, including both albums and singles released in his lifetime and after. The book also features a list of all of the songs he copyrighted, stories about his stock car racing activities, several previously unpublished photographs, and interviews with those who knew and worked with him_and even an extensive interview with Robbins himself. As a tribute to a great entertainer, this volume will be of interest not only to entertainment writers and researchers, but also to Marty Robbins fans worldwide.